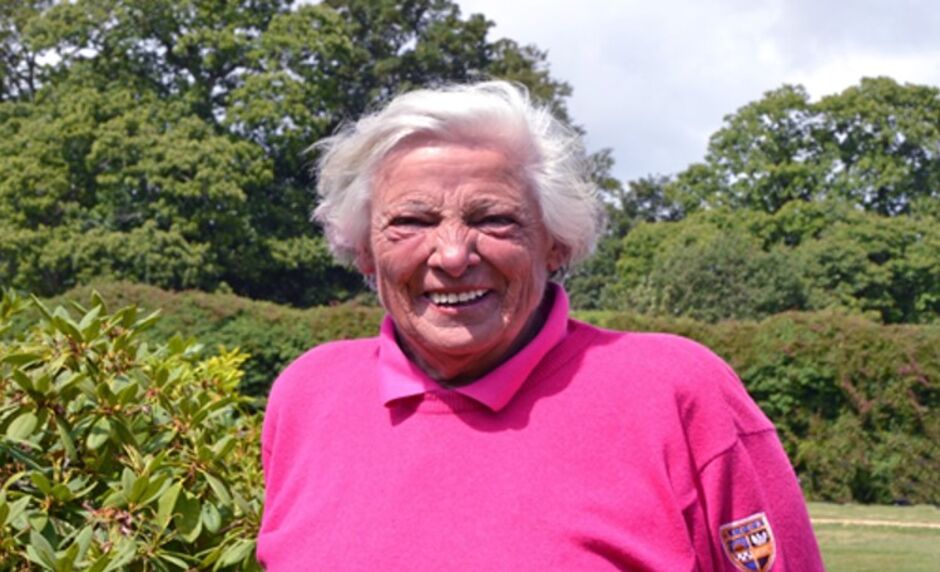 Pat Stovold (shown above) was a past Captain and past President of SLCGA. She was a great supporter of Surrey Ladies Golf, especially the development of junior golf. Keen to encourage the talented young golfers in Surrey to County First Team standard, Pat introduced the Stovold Trophy to the South Region golfing calendar in 1997. The 8 a side matches (reduced to 6 in 2015) are played against Hampshire, Kent, Middlesex and Sussex with foursomes in the morning and singles after lunch.

The trophy (shown below) presented by Pat is unique. It is a beautiful round leather box with a silver lid, into which there is a carving of five silver cherubs. Pat thought that this was a very fitting tribute to all the “little cherubs” who represented the five counties. 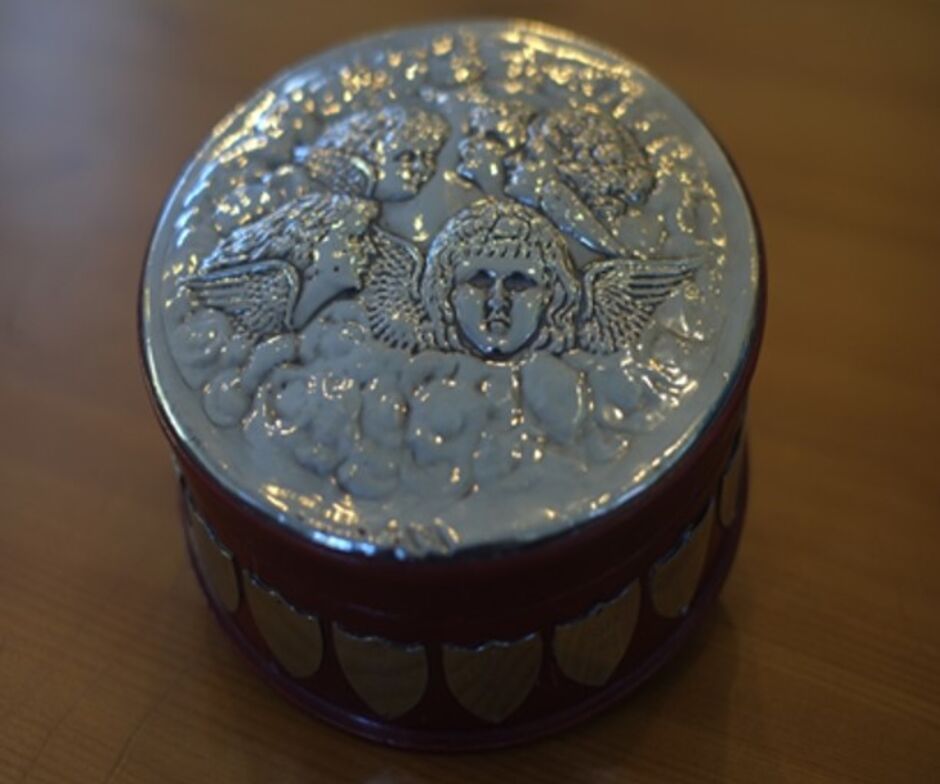 
The Second Team play 4 Stovold matches (teams of 6) throughout the summer months.

The team for each match will be selected following the announcement of the 1st team county matches. All interested players with a handicap of 6 and below (slightly higher for juniors) will be asked for availability for these matches in January.

Selection will be based on performance (eg practice county matches, county championship), past Stovold performance and level of commitment to Surrey. More importantly, a particular emphasis will be placed on selecting players who have the potential to represent the First Team in the future.

1. Second Team County Colours are awarded to players who have accumulated 4 points in Stovold matches.

2. Points are awarded as follows:

3. Points may be carried forward from one year to the next.

4. Colours may also be awarded at the discretion of the Stovold Captain to a player without the required number of points, but who has shown significant commitment to Surrey golf and been a valuable Stovold team member.

(b) Team sheets should be exchanged between the Team Captains 15 minutes before the 1st foursomes match is due to start, and may not be amended.

(c) Team sheets should be exchanged between the Team Captains 15 minutes before 1st singles match is due to start, or as soon as possible after the conclusion of the last foursome, whichever is later, and may not be amended.

No caddies are permitted.

(a) A buggy or golf cart may be used by a registered disabled player provided the club at which the match is played allows their use.

(b) A player who is recovering from illness/injury or who has a medical condition may also use a buggy or golf cart provided she produces a         Doctor’s letter supporting why she requires its use.

(c) The Team Captain should notify the opposing Team Captain in advance of the intention to use a buggy or golf cart.

(d) If a player is allowed the use of a buggy or golf cart, it is recommended that she contacts the club where the match will be played to check

that club’s buggy or golf cart policy and, if required, availability.

(e) The cost is to be met by the player.

(f) Only the player is allowed to use the buggy (not her partner or opponent).

DMD’s may be used but they must conform to the rules and measure distance only (Ref Rule 14.3)

(a) the highest number of TEAM matches won will decide the winner.

(b) The highest number of GAMES won will decide ties.

(c) Should there still be a tie then the Stovold Trophy will be held jointly.

Anyone who plays for their County in County Match Week or County Finals is only eligible to play in a Stovold match which occurs after County Week of the following year. If a player was nominated to play in County Week, or as a non-travelling reserve and had not been chosen to play, they may play for their Stovold Team in the current year.

All matches must be completed by the date fixed for the playing of the Alresford Cup. (September tbc each year) The trophy will be presented to the winning Stovold Captain or County Captain at this event.

9. Procedure if course is or becomes unplayable

(a) If no play is possible in the morning, matches will be decided on the results in the afternoon singles

(c) If the singles cannot be played that afternoon, all matches will be declared as halved.

(d) If play is abandoned after the completion of the foursomes all singles matches will be declared halved matches.

(e) If no play is possible at all then an alternative date can be arranged. Failing this the match should be called a half.

Results to be sent to the Team Captain as per rota below: